Surely you have seen Alpine Skiing sometime in your life. And I am sure because it is the most practiced in ski resorts, and we have all seen images of some of them even if we have never set foot in one.

Despite being something that everyone has seen, it is also a sport that usually generates many doubts at the beginning. Although there are easily identifiable tests, there are others that are not so easily identifiable and it is even difficult to distinguish which one it is. That is why today we are going to try to explain to you in a simple way what alpine skiing is and what modalities it has.

Characteristics of Alpine Skiing and its origin

These zigzagging movements are the key to this type of skiing, the objective of which is to descend slopes as quickly as possible. To reach high speed, simply place the skis perpendicular to the slope and they will slide until they reach maximum speed.

However, when the terrain is not smooth and there are obstacles such as trees or rocks, the situation becomes more complicated and it is necessary to control the speed.

This control is achieved by turning the skis. If perpendicular to the slope they reach maximum speed, while parallel to the slope they slow down the descent. And any intermediate degree between one position and the other produces different trajectories and speeds.

But if this turn is always made to the same side, the trajectory of the descent will end up changing in that direction and the destination may be different from what was originally planned. However, when the turns are made alternately to one side and the other, the trajectory will become relatively straight.

This is how Telemark was born, a form of Nordic skiing that consists of descending slopes in a fast and zigzagging manner. As in all Nordic modalities, and as we explained when we talked about cross-country skiing, in Telemark the heel is also free, which makes the turning movements very pronounced to the point of almost touching the ground with the knee.

To improve this, bindings were invented to block the movement of the heel during the descent and thus improve speed and control. However, these eventually proved to cause serious injuries in falls.

This led to the invention of a new system that allowed the boot to be fully attached to the ski. This new equipment began to be used massively in the Alps, which is why it came to be called Alpine Skiing, to differentiate it from “traditional” or Nordic skiing.

In any case, Alpine Skiing could not really develop until the chairlift and similar systems to move skiers to the top of the hill were invented and popularized, since this equipment does not allow the necessary freedom of movement to make ascents.

Basically there are 4 modalities of Alpine Skiing:

There are other disciplines that are actually modifications of these 4:

And finally, all Freestyle skiing can be understood as modalities of Alpine Skiing, although they usually have their own classification:

In this article we are going to focus on the first 4 modalities since most people who start following Alpine Skiing have difficulties in differentiating one from the other. And although we will also briefly explain the second block, we will leave Freestyle Skiing for another article, otherwise this one would be too long.

The first thing to understand is that, although in the 4 modalities of alpine skiing the shortest possible time is sought, in 2 of them the turning technique is the priority (Slalom and Giant Slalom) while in the other two the speed is the priority (Downhill and Super-G).

Another important thing to point out is that the course is marked by a series of points that you must inevitably go around or cross. These points are known as gates and can have different shapes and sizes depending on the event we are talking about. But let’s take a look at each one of them to clear up any doubts… 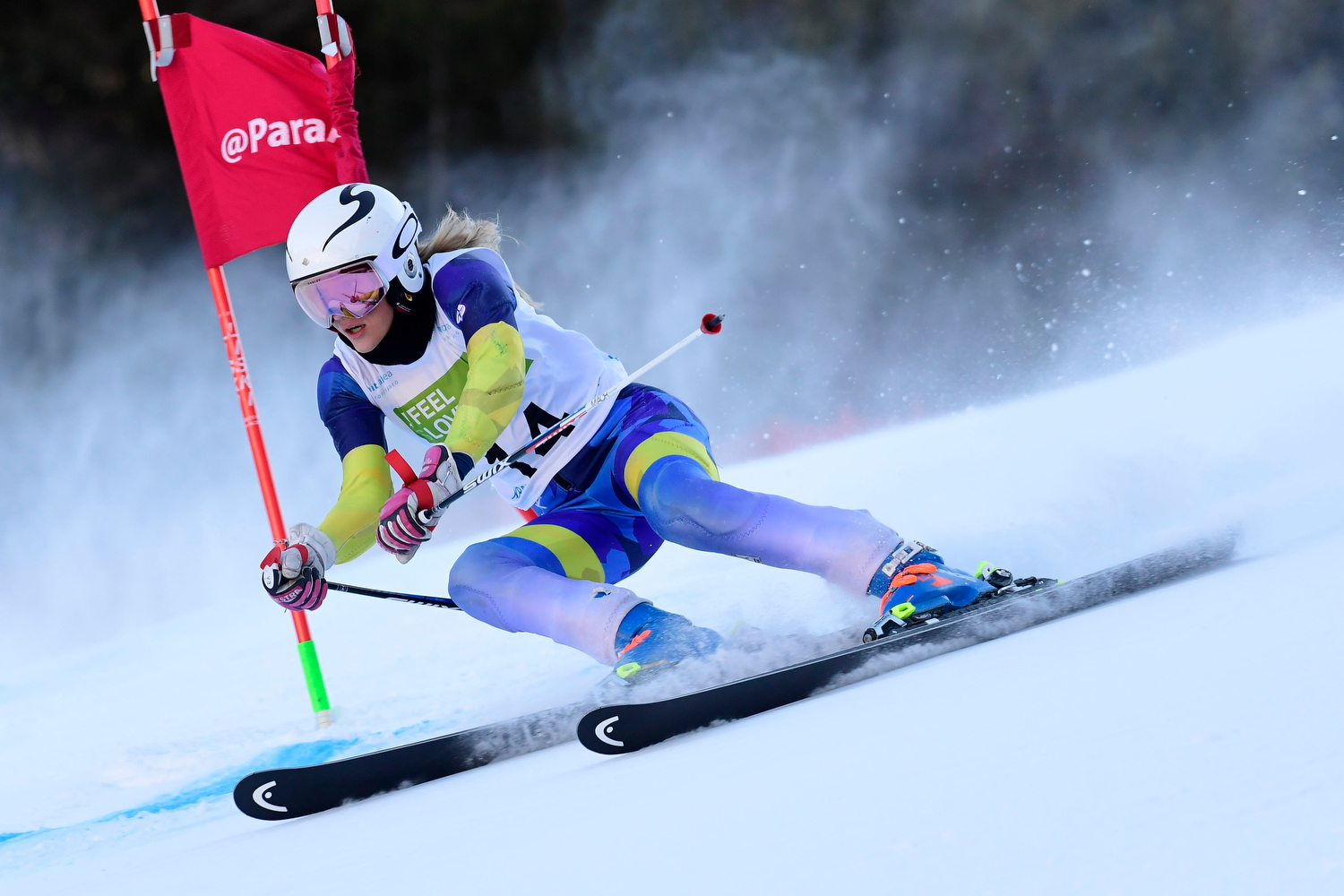 Slalom: The alpine skiing event with most gates

The Slalom is the alpine skiing event with the largest number of gates and whose position is closest to each other. This proximity forces to make quick and short turns since each of them must be surrounded by right or left alternately. It is precisely to facilitate these turns that the gates are differentiated in red and blue.

In the past, the gates consisted of 2 poles (hence the name gate), the ski had to go around one of them and the skier’s body had to pass between them.

Given the proximity between one and the other, the system was replaced leaving a single pole with a flexible spring at the bottom that makes it bend when the skier goes around it. It is not necessary that the ski itself touches it, it can also be done with the arm or calf.

The competition consists of 2 descents, which can be on the same slope or not at the discretion of the organization, and the winner is the one who makes the shortest time in the sum of both descents.

This is another of the Alpine Skiing competitions in which the turning technique is a priority, although in this case the gates are further apart than in the Slalom. Nevertheless, tight turns are still necessary.

Although the gates are formed by 2 poles, this must be surrounded without the need to pass through the middle. The only purpose they have is to mark in a very visible way the point where the gate is located and the direction of the turn (right or left) which is determined by the red or blue color.

This discipline seeks speed over turning technique, in fact in many sections of the race, skiers go in a shrunken position in order to reduce wind friction and go faster. It is the fastest Alpine Skiing event and the gates are usually very far apart.

The track is marked with blue lines to facilitate the visibility of the athlete and the areas are also marked with reliefs so that they can distinguish them despite the shadows that may form. The gates are formed by two flags, one on each side of the track and each held by 2 poles. The skier must pass through the middle of both flags. As long as he/she crosses all the gates, it does not matter if he/she goes out of the marked route in the rest of the course.

This modality is disputed in a single descent, so it is usual that before the competition there are 2 days of familiarization and training.

You can also see this type of alpine skiing with the name of Super Giant Slalom although the most common is the name Super-G.

Like the Downhill, it is a test of speed, although to a lesser extent than the Downhill. Super-G has more turns, both long and medium, and more gates that are located closer to each other. Also the track jumps tend to be longer.

Like the first two tests, 2 tasks are performed on the same day and the winner is the one who has achieved the shortest time in the sum of both descents.

Although these are the 4 main modalities of Alpine Skiing, there are 2 more that are combinations of these:

Consists of 1 Downhill and 2 Slalom descents. Each of the two events is carried out on consecutive days and once again the winner is the one who accumulates the least time in the sum of all the downhill runs.

In this case it consists of a Downhill or SuperG descent and 1 Slalom descent. Both events are performed on the same day.

It is nothing more than the Slalom event but performed at the same time by two skiers, on two parallel slopes.

They are performed in heats where whoever passes through the finish line first qualifies for the next round until there is a winner.