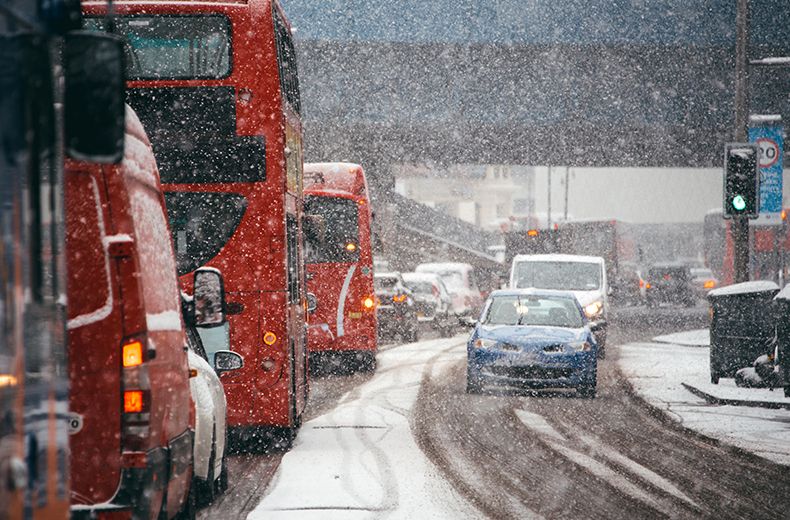 The right reflexes to drive on snow

In recent years, the weather has often gone out of its way to throw its snow right on Saturdays, making a senseless mess on the roads of ski resorts to the great displeasure of holidaymakers trapped, but unfortunately often guilty …

It is enough to disgust people to go to the ski resort during the vacations and yet, some tricks allow it to pass between the drops (at least the snowflakes), at least as much as it is possible.

The legislation seems to be about to evolve with a potential obligation to be equipped with 4 snow tires (or chains) in the departments usually covered by snow, but nothing is official yet. And once you arrive at your destination, remember to raise your windshield wipers for the duration of your stay!

It’s silly to say, but it’s still basic! However, how many people take to the roads without any equipment when snow is the forecast?

Beyond the weather forecast of the TF1 TV channel, many specialized websites will give you precise indications, which you should cross-check the day before your departure.

So, go visit several sites, in order to see a trend. meteoblue proposes multi-model information that allows visualizing the proposals of the different (very large) computers working on the issue. If it snows in the plane, postpone or anticipate your departure because even if you are equipped, you will be blocked, it is certain.

Otherwise, equip yourself according to the situation because, once blocked on the main roads, it is impossible to find a way out…

2-Equip your car with snow tires:

Seen from the Alps, we wonder why it is not mandatory but we only have to see what happens in Grenoble, to understand that the fight is far from being won even if it seems that the law can evolve quickly on this point …

Nevertheless, these tires allow you to progress on snow with real safety and a remarkable versatility.

The obstacle to the equipment often comes from their summer storage but you should know that some sellers offer this service.

As for the investment, it remains low since while you wear out your “snows”, your “roads” rest. Sure, a pair of chains can always come in handy, but it’s a pain in the ass to put on and offers no versatility…

On a snowy climb (as on the flat, for that matter), it’s all about driving smoothly, without bumping or braking. Your tires maintain the inertia with talent but don’t dream too much either: if you stop on a slope, they won’t have the power to make you go back.

So you have to preserve this inertia by keeping your distance so that you can always turn the wheel to avoid a car that stops, or slow down to deal with an obstacle without getting stuck or turning around to regain momentum where possible.

If you ever get stuck, if your tires don’t “seize up” enough to get the machine going again, there is still a (slim) hope.

Obviously, you must not let the snow on the ground exceed the ground clearance of your vehicle, because in this case, you will only complicate the matter by lifting the running gear more and more, and therefore, you will have to shovel longer…

As a last resort, try to put as heavy a person as possible on each wing of the car (for traction). With a little luck, this extra weight will allow you to gain grip, knowing that you will have to find a part on which you have not already skated to hope to start again. Indeed, as soon as the wheels wax the snow, it turns into ice: impossible to hope that the tires can make their grip speak in this case…

In desperation, you can also try to go in reverse (traction) for the same reason: when going uphill, gravity tends to pull backward and thus to lighten the front axle. In reverse, the latter will be “heavier” and will press harder on the tires.

In the worst case, you will already be in a position to go back to the plain, so it is possible to try to pass a problematic section (steeper than the average) but it seems unlikely to climb more than a few hundred meters in the middle of a snow storm…

Be modern and live with the times. Thanks to these applications, you can anticipate traffic jams and other slowdowns.

Of course, this does not allow you to avoid them for sure (far from it), but at least, if the way up to your favorite station is announced blocked, there is no need to throw yourself into the battle, even if you are well equipped. You can take the time for a nice dinner, a museum visit, etc.

Similarly, if the snow seems to be close, don’t risk taking the highway which, if a truck gets in the way, will be blocked for hours with no way out. If you want to hang around, you might as well stay on the good old National roads (well, Departmental roads for the most part!) and have the possibility to get out or stop at any time.

Depending on your program, or the frequency of your stays in the mountains, a pair of chains can always save your ass in case of a big problem.

Of course, but they still have to be the right size! Also, having chains in the trunk is good, knowing how to mount them is better.

When you will have to put your hands in the snow, at night, under the storm and in the middle of the other wrecked of the road, it is better not to start by reading the instructions and to go back to it three times at the risk of leaving your fingers there and to spend a very unpleasant moment…

In short, if you already have snow tires or even four-wheel drive, only those who like the “belt and suspenders” concept will buy chains just in case, but it must be admitted that nothing is more efficient in this respect, nor less versatile…

Here is a very important detail that no one cares about: check before leaving that the windshield washer tank is full and above all, use one that does not care about frost.

Mountain roads and the highways leading to them are regularly salted. When it rains or snows, your windshield is quickly covered with a layer of salt that makes driving impossible and dangerous. Only the regular use of a windshield washer allows you to keep a correct vision.

And every winter, many people are fooled and struggle to move forward, taking reckless risks at the wheel but also stopping anywhere to clean their windshield with the rest of the Badoit provided for the trip…

In a snowy climb where it is imperative to keep speed, being obliged to stop for this reason means turning around, going back to the next flat to try again…

8-Put an interface under the wheel to gain grip:

Be careful! If this technique coming from the desert (plate of desanding to find lift) can be effective in system D mode, it is a question of doing it intelligently.

Put a carpet, a cloth but especially not a board (I’ve seen it!) which will, when the car is skidding, become a dangerous projectile for those who had the bad idea of wanting to push the car at the same time, or even for the underside of the vehicle (exhaust pipe, hose that is lying around, etc). Be very careful if you ever get the chance!

With these 10 points, you are ready to face the worst snow falls while skiing. But such snowfall also means skiing (and off-piste!). A bad thing for a good thing.  So good luck!